(Cross-posted on my other blog, gentlemenandtarpaulins.com)

I spent the weekend in Pembroke Dock, attending the launch events for the bicentenary of the foundation of the Royal Dockyard in 1814. The yard was established to take advantage of the tremendous deep water harbour of Milford Haven, and was intended to be exclusively a building yard. During its history, it built over 200 ships for the Royal Navy, many of which had long or remarkable careers: they included the Erebus, which took part in the ill-fated Franklin expedition; huge ‘wooden walls’ like the Duke of Wellington; ironclads like Dreadnought (1875) and Thunderer; the armoured cruisers Warrior and Defence, which were sunk at Jutland; and no fewer than five royal yachts, including the great Victoria and Albert of 1899. (A full list of the ships built at Pembroke Dock can be found here.) The yard closed in 1926 – I’m currently working on an article about the closure – and later became a flying boat base, playing a prominent part in the Battle of the Atlantic.

HMS Duke of Wellington, launched at Pembroke Dock in 1852 as the Windsor Castle; the Duke died on the day of the launch, so she was renamed after him

The dockyard site was neglected for many years, and many of the buildings were cleared and built over, primarily when much of the site was converted to an Irish ferry terminal in 1979. But two of the original thirteen slipways remain, albeit without the iron covers that were the first ever to be installed in a dockyard, as do the dry dock and caisson, the mast pond, and a number of the dockyard buildings, including the fine row of officers’ houses and the dockyard chapel. The latter, which was restored a few years ago, was the venue for the weekend’s events, which centred on the premiere of a remarkable digital reconstruction of the dockyard as it was in about 1860. This was produced by the Digital Building Heritage group at De Mentfort University, Leicester, and it certainly generated a great deal of interest from both the invited audience on Friday and the general public on Saturday.

The other really positive thing about the weekend’s events, and about the bicentenary commemorations as a whole, is the extent to which the local community has become involved with them. A dynamic team has encouraged people to come forward with their own memories and materials – producing, for example, the diary of the last established workman to be employed in the royal dockyard – and to undertake their own research, for example into the history of their own houses. (The entire town was built from scratch from 1814 onwards to accommodate the dockyard workforce.) It struck me that this is a terrific example of how to involve local people in their heritage, and the numbers present on Saturday certainly suggest that it’s proving to be a tremendous success. I hope to be able to go down to Pembroke Dock for some more of the bicentenary events, and will report back both here and on Twitter! 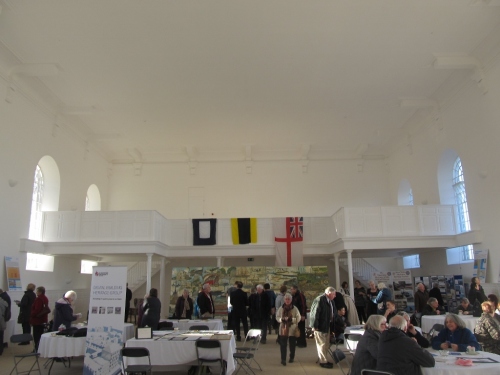 Interior of the restored dockyard chapel

3 thoughts on “The Birth, Death and Rebirth of a Royal Dockyard”

Links to Societies and Organisations