The other day, I visited Bodrhyddan Hall near Rhyl. This is a fascinating house, principally 17th century with considerable 19th century remodelling, and it has a very interesting history; some of it, indeed, is embodied by the current owner, Lord Langford,  a 103 year old veteran of campaigns in the Far East during the Second World War (and whose father was killed at Gallipoli during the First). 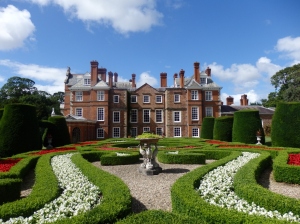 It also contains a considerable amount of naval interest. I already knew about the house’s connection with Captain Conway Shipley, whom I wrote about in Britannia’s Dragon; a younger son of the family, he distinguished himself in command of the 18 gun HMS Hippomenes in 1804, aged just twenty-one, when he led his crew to victory over the 36-gun French privateer L’Egyptienne. He was killed in 1808 while trying to cut out a French corvette from Lisbon harbour. Bodrhyddan has on display the Lloyds Patriotic Fund sword that was presented to him after the victory over L’Egyptienne, together with the ‘everyday’ sword he was carrying when he was killed (the hilt was tied to his wrist). There is also a sketch of the Hippomenes / L’Egyptienne action by the former’s lieutenant.

The house has a considerable amount of memorabilia relating to Rafe Grenville Rowley-Conwy, a rear-admiral who died in 1951 and who served latterly as Lord Lieutenant of Flintshire. When the First World War began he was commanding the destroyer Lark, and the guidebook claims that she fired the first shots of the naval war during the action against the German minelayer SMS Konigin Louise during the night of 4/5 August 1914. A German shell from this action is on display in the entrance hall of Bodrhyddan. However, most sources attribute the first shot to Lark‘s sister ship Lance.

There are also a number of other naval relics. The entrance hall, which contains an eclectic collection of armour (including some from the British civil wars), houses a couple of naval swivel guns that were apparently dug up in the 1970s from a ditch near a house in Llangollen. The fireplace in the drawing room is surrounded by elaborate carved panels supposedly taken from the chapel of a Spanish Armada ship wrecked on Anglesey – although history doesn’t record any Armada ship having come to grief on those shores. Finally, the house has a splendid piece by the great 18th century naval artist Peter Monamy, ‘Ships of War and other craft in a squall’. For some reason, though, this is displayed in an out-of-the-way corner in the corridor on the way out to the garden.

Bodrhyddan is open relatively little, only a couple of days a week for some of the summer, so it was good to have an opportunity to see it. The house demonstrates both the naval connections of one Welsh gentry family, and the unexpected items of naval heritage that can often be stumbled across in Welsh houses and museums.

Links to Societies and Organisations